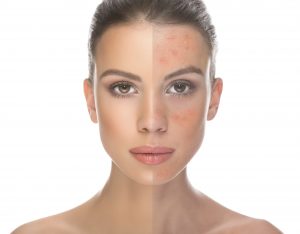 Rosacea is a common skin care condition with four main subtypes that affects approximately 461 million people around the world. It’s more common in people with fair skin that with dark skin, but its cause is unknown and there isn’t yet an established cure.

However, knowing the potential triggers has been quite helpful in managing the disease. A survey of 1,066 rosacea patients found that these were the top 10 triggers:

To minimize sun exposure, people with rosacea can use a good sunscreen that’s broad spectrum—blocking out both UVA and UVB rays—but they should consult their dermatologist as to the ingredients, since certain people can have sensitive reactions to common sunscreen ingredients.

For stress, the National Rosacea Society found that 67% of patients were successful in managing stress-related triggers. Tips from the Society include simple things we often skip over, like saying no (don’t take on too much), making time for fun, taking meds as per doctor recommendations to minimize flare-ups and having a healthier lifestyle by eating better, sleeping enough and exercising. To make sure your exercise routine doesn’t provoke a flare-up, try short sessions of 20 minutes each rather than long sessions lasting an hour or more.

Tip of the Day

The equivalent of a couple of glasses of wine a day may be good for health. It can also help you keep a good mental frame.